Time to fire up the blog again. It’s been a while. Thoughts to follow.

Horizon Music has been a staple in the Edson retail community for over 20 years. After a short hiatus, Horizon Music is re-opening their doors. Owned and operated by husband and wife team Greg and Tracy, The Templetons themselves are insanely gifted musicians who take pride in offering premier services and products. 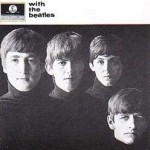 Keeping all this in mind, I wanted to have a little fun with a set of portraits we took one summer. During the initial Horizon close-out sale, I was literally sitting amongst a set of LPs (remember those, kids?) and getting a kick out of the various labels and covers. The initial thought was to turn a standard portrait into a parody of an album cover. The idea quickly evolved into wanting to make a more direct connection between  the importance of the Templetons to our music community and an iconic rock image. 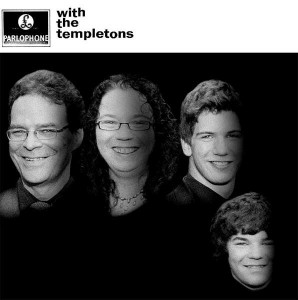 When something fits, it’s surprising how quickly everything comes together. Fortunately, the design of the ‘With The Beatles’ cover is simple. A couple of Photoshop layers contained the layout of the album, four more contained the portraits. Each was selectively masked, changed to B&W, and had a gradient fill applied. Finally, to match the graininess of the original, a little digital noise was added.

Meet Laurie Wiltshire. Laurie is one of our many incredibly hard-working Canadian athletes. When I first met Laurie, she was ranked atop our woman athletes and held Olympic aspirations. 5 years later, due to myriad of reasons, her goals have changed. Potentially nearing the end of her competing career, she asked me if I would photograph what might be her last Senior Nationals competition.

The support given by local clubs, friends and family is excellent. However, like many of her peers who follow a grueling regimen necessary to compete on a world stage, they must also work a full time job or two to help make ends meet. When Laurie is not training, coaching, traveling and competing, she’s punching the clock as a baggage handler.

Laurie is a very technically proficient fighter. Going through the photos after the fight, it amazes me how little her facial expression changes. It’s usually very calm –  directly opposite of her opponent’s!

She made fairly quick work of 3 opponents during the elimination rounds, en-route to the finals. The match went on for longer than we’d seen her previously take, and led to a few anxious moments before ending in dramatic fashion with Laurie winning the gold. Judo is an exciting sport which I constantly found difficult to predict the outcome. Quite often, the flow and accumulated points changed in an instant. 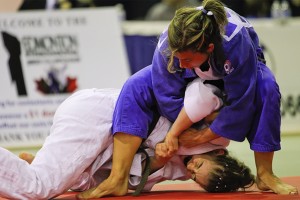 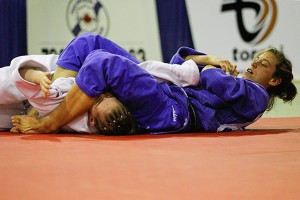 Although not mathematically out of the running for the Olympics, she must continue to win tournaments as well as hope that others falter. Should be a hell of a finish, one way or another.

If ever you have an opportunity to shoot an available-light event at the Mayfield Trade Centre, don’t. Run away. The building  is an antechamber that sucks away what little light is available. The incandescent pot lights are few and far between, and hang high above from the rafters.

With Judo, as the fighters are often hunched over and grappling with each other, you’re also shooting into the shadows created by the athletes themselves. Although the situation absolutely begs for some fill flash, I can’t think of  a quicker way in which to get thrown out! These are not people you want to piss off.

Although the extra light given by a 50mm 1.4 would be sorely needed, it doesn’t get me close enough. Back to the trusted 70-200 2.8. However, at an ISO of 2500, the venue is barely allowing for 1/60th shutter speed. Although you could technically get sharp shots of a stationary subject while hand-holding, Judo is far from stationary. I locked in at 160th and fired away. 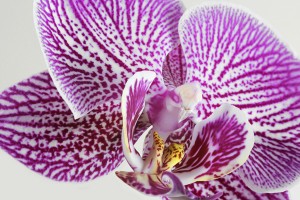 Summer has been all but elusive – an afternoon of sun is followed by a week of rain. The promise that June normally brings is broken by a skiff of snow.  As much as I’d like to be sitting at the fire-pit while sipping on something numbing, I can’t say I enjoy tending to a lawn or garden. Time better spent elsewhere! The only thing I can grow are weeds and caraganas, neither of which makes me popular with the neighbors.

These facts eluded a good friend as she presented to us an orchid as a gift. You don’t need to be a horticulturist (and I’m most definitely not!) to be taken in by the beauty of an orchid. Fearing  that it would suffer a quick death under my care (as have other living things – reason #213 why I don’t have any kids), I promptly setup a quick photo shoot.

A large bay window provided my main light, one strobe fill in the shadows, and another to blow out the background. A Sigma macro, although slow, was tack-sharp. 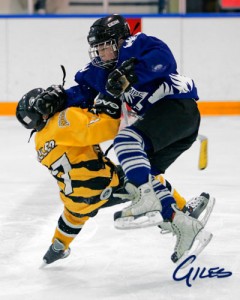 Event photography is my bread and butter. Sporting events in particular can be very exciting, if not challenging, to cover. These two combatants were captured during the 2006 Alberta Winter Games. Hockey is a very frustrating sport to photograph. It’s not so much the action – although hockey is a fast sport.

First off, the typical area is not very bright at all. One must shoot at a high ISO and open up your aperture in attempt to get a barely acceptable shutter speed. Even then, you’re lucky to get a shutter speed somewhere around 1/400. Further, when shooting with a zoom lens, a smooth technique becomes very important.

Even more frustrating is the slow lights. The white balance will change with every frame. In a burst of 4 photos, one will likely have a magenta cast, the next a yellow, the next blue, then maybe, if you’re lucky, no cast at all. Although you’ve got good focus and desired composition, this will result in many unusable shots.

As the player wearing the blue jersey had a couple of physical shifts, I was sure to train my camera on him as he left the bench. With my focus long locked, it didn’t take long for him to deliver another hit and this photograph. It’s always satisfying to capture an iconic moment. 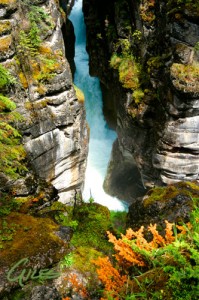 Not only are the photographic opportunities both plentiful and incredible, but it is also a very comfortable place to be. Jasper holds on to that small hometown feeling. It is truly an escape: a place where I can go to relax and think.

An ideal day in Jasper is one where the greatest decision to make is whether or not to enjoy just one more cup of coffee at the local bakery, or to set out and explore. The day should finish over a beer (or two), contemplating the sights seen, the shots taken and the shots missed.

A photographer in Vienna once reminded me not to ignore the beauty we often have in our own backyards. In the very next breath, he also expressed jealousy of what my backyard contained.

Sith Went Down to Georgia

Recently, a friend returned from Vancouver. He forwarded me a photograph of a street busker, dressed as Darth Vader, playing the fiddle. I found this both funny and in need of some Photoshop attention. 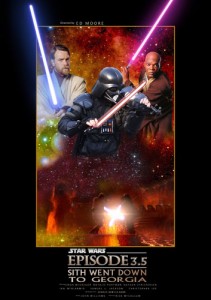 A few minutes with Google returned an official poster that I could work with, a NASA photo of a nebula, and a set of ‘Star Wars’ fonts. The poster came together fairly quickly; I had all the elements necessary, and a clear idea of what I wanted to accomplish. Another hour with Photoshop produced what was in my mind’s eye.

Creating the lightsaber effect is great fun. It’s definitely a struggle not to keep putting it into other photos!

If you’d like to geek-out, the instructions used can be found here: 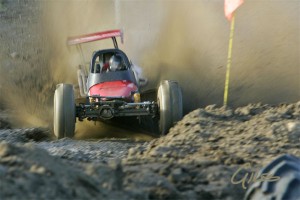 This is the incorrect way in which to photograph a rail car (See here for the correct way). People or machines are not always predictable.

Here’s a series of photographs that almost ended with a dramatically different tale. During one of the last runs of the day, this driver took a decidedly bad turn. Unlike the previous post, notice how the rail car is pointing directly at me?

Although both my eyes are open while taking photos, you tend to experience a bit of tunnel vision. In certain situations, your adrenaline is off the chart, and you’re so very focused on trying to ‘get the shot’. 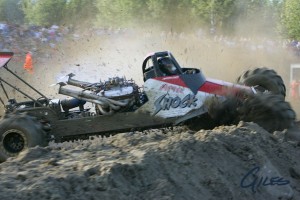 My trusted sports shooter, the Canon 1D Mark II, boasts ’8 frames a second’. This sequence occurred during that burst. I was positioned toward the end of the track, standing with the official time-keepers. Working directly with event organizers is important, and generally keeps everyone safe & happy.

While I was locked-on, Barry, one of the event’s organizers, grabbed at me, pulling me off the track’s shoulder.

The rail car bounced just shy of where we were standing and performed a last 180 degree spin before coming to a rest. After taking the last shot, I looked at Barry, expecting to be relocated. 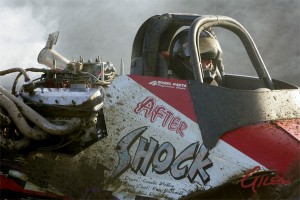 Instead he declared, ‘That was… awesome! Did you get it?!?’

These sold a few copies. Every once in a while, you’ll take a technically shitty photograph that still captures people’s imaginations. 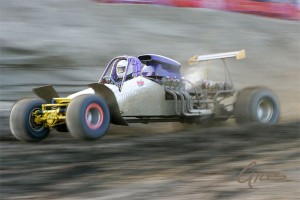 Here’s the safe way to photograph a rail car. A rail car is a jet engine on wheels – a nitrous-oxide fueled monster that can power through a mud bog in mere seconds. This is the best selling shot I took during the Hillbilly Crunch & Mud Bogs 2007. As more than 7900 frames were taken over the weekend, apparently I’ve got to work on my hit ratio… More notably, there’s a minimum amount of processing here as the photo you see was pretty much as shot in-camera.

One of the reasons I enjoy event photography is for the excellent ‘front-and-centre’ seating it provides. It’s an excellent way to experience something different and meet exciting people. One can live vicariously through the subject. However, being this close to the action is not without its perils.

Notice the position of this particular vehicle – parallel to me. This is very important. Why? Because I know where it’s going to be. At least, I hope I know where it’s going to be. Even the logically-challenged amongst us don’t have a tough time envisioning the route the car is supposed to take and will keep me out of harms way while allowing me the use of all four limbs.

Life has a way of keeping things interesting… Here’s how not to shoot a rail car. 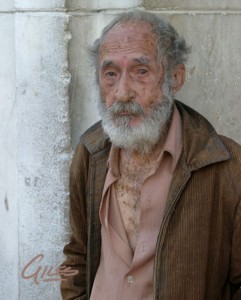